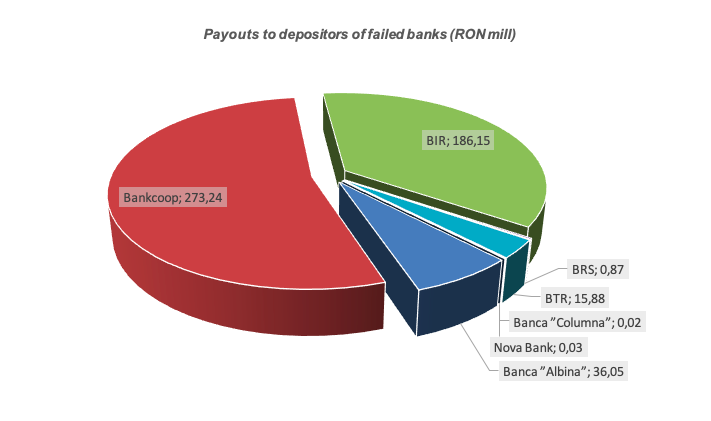 The payout periods applicable by law - 3 years from the start of the payouts - expired successively during 2002-2010, the last deadline of January 10, 2010, being applicable for the depositors of Nova Bank (bankruptcy proceedings initiated in November 2006). Any legal payout obligation by FGDB ceased after January 10, 2010.

Starting 2007, România had not recorded any banking failures so as FGDB’s intervention be required.

Payouts and recoveries from failed banks as of March 31, 2021

Out of the 797,818 depositors in the payouts lists, 470,353 depositors (59%) did not request the compensations, although FGDB repeatedly issued Notifications to depositors through mass-media and its own website related to payouts and their deadlines.

The amount of uncollected compensations was about RON 6.4 mill, representing 1.2% out of the total compensations in the payout lists. 94% of the unclaimed deposits had an average value of RON 10.

For the payouts to guaranteed depositors, FGDB became creditor of the failed banks, recovering thus far about 36% of the compensations made.